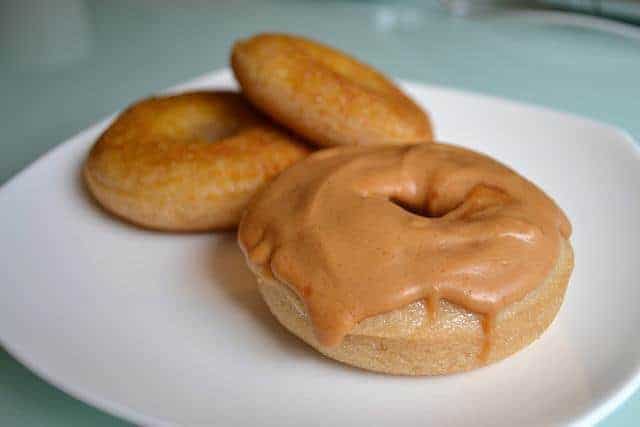 There is something about the tender, indulgent, tastiness that comes with a donut. You know the kind that taste just like they were heaven sent and bursting with subtle sweetness; that is until you add frosting or glaze and then the sweetness is not so subtle.

The same is true for a gluten free donut. Whether you like more of a cake donut or a pillowy-soft rising donut, they can all be yours if you are ready to rise to the challenge. Actually it’s not really a challenge, more of an adventure.

Tweaking and tasting, then tweaking and tasting some more - sometimes even the tips about gluten free donuts make you want to test out new ingredients even more! Fortunately, this is one of those recipes that really doesn’t need much tweaking – sure if you want more cinnamon and less nutmeg, by all means add and subtract those. But other than that, this is a sure-fire success – one that even your gluten-eating friends will be raving about.

One word of warning about this recipe however – you will probably find yourself wanting to make more of them. They really are that good. And since the dough doesn’t take hours to prepare, you just might give in and whip up a second batch.

And one more warning before we dive in to the goodness of donuts – take extra precaution whenever you’re using hot oil. One splash of it can spell disaster.

Enough of the warnings, here is a recipe for gluten free donuts that will truly melt in your mouth.

Fill a large, deep cast iron skillet with oil – midway up is fine. Heat the oil to 375 degrees. Line a couple large cookie sheets with paper towels and then place your baking racks on top of them. This is a little trick I learned – it allows the grease to drain, but doesn’t let them get soggy, as they would by sitting on paper towels.

In a medium bowl, mix the dry ingredients with a wire whisk.

In a large bowl or bowl of a stand mixer, combine the eggs and milk. Add the dry ingredients to it and beat with a dough hook until the ingredients form a ball of dough.

Turn the ball of dough out onto a lightly, gluten-free-floured surface. Roll the dough until it’s ½ inch thick.

With floured donut cutters, cut out donuts. Then combine remaining dough and cut out more donuts, until you’ve used it all. Make sure to save the holes for donut holes!

With a wide spatula, carefully slide or place or lay the donuts into hot oil. DO NOT let them “flop” in otherwise you will have some serious burns.

Fry only a few at time to ensure the temperature of your oil stays constant.

Time them for 2-3 min on each side and then remove them with slotted spoon onto the large cookie sheets.

After frying all of your donuts, fry the donut holes and leftover dough. After they are cooled sprinkle with confectioners sugar or cinnamon sugar.