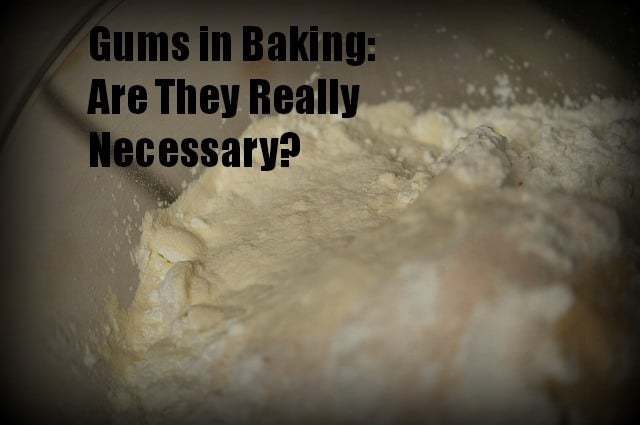 Within the gluten-free baking community, there is a growing consensus that for many recipes, the use of gums isn’t totally necessary. By ‘gums’, I mean the popular alternatives to gluten, namely, xanthan gum or guar gum. It’s an interesting shift in thinking as these two ingredients were previously untouchable – they were the hallmarks of gluten free baking. In fact, some of our gluten free friends say in no uncertain terms:

"Don't try to bake bread without any gluten substitutes, like xanthan gum."

In other words: if you want your baked goods to come out well, then you’ll struggle without xanthan gum (and presumably guar gum as it falls in the same category).

What are these gums and what do they do?

Here is where a bit of science comes in to play... Gluten is a composition of various proteins which is found in wheat and other related grains. Gluten is what makes baking easier as it gives dough an elastic, sticky consistency. It helps dough rise and maintain its shape. When you eat the end product, it gives it the chewy texture. It is what is known in the baking community as a ‘binding agent’.

Enter Xanthan and Guar. These are substitutes for gluten. They help recreate some of the stickiness and elasticity to make baking with gluten-free flour substitutes a lot easier. The scientific term for them is ‘hydrocolloids’ meaning they swell when they mix with water (giving dough its characteristic ‘rise’).

Without these substitutes, baking is usually a disastrous affair. When dough doesn’t rise, the end result is hard and/or brittle (think biscuits or shortbread). The dough has failed to rise and there’s no air to give the baked product its characteristic fluffy nature and secondly, there’s no stickiness or elasticity to the product so it falls apart and is invariably brittle.

Baking Without the Gums

It may sound like sacrilege and more like wishful thinking. After all, these gums are the hallmark of gluten free baking. Could it really be possible to bake without needing to use these gums? Absolutely! In fact, many prolific gluten free bakers are beginning to question the real necessity of using these gums and are even regarding them as second rate in comparison to other ingredients which do the job just as well.

Flaxseeds or chia seeds are being hailed as a very workable alternative to the gums. The fiber in the seeds actually may produce a similar ‘binding’ effect, giving the dough similar properties to regular flour dough. See the alternative gums article here.

Why the sudden dissent?

As I mentioned earlier, there is a growing consensus that the gums may not be totally necessary. Others are also questioning the safety of these gums – whether they are any good for you and the anecdotal experiences have been pretty interesting to say the least.

It’s no secret that Xanthan gum and guar gum are highly processed. These are industrial binders and they are found in several thousands products – most are not even food related. Interestingly enough, Xanthan gum is derived from bacteria and can ironically be made by fermenting wheat (among corn or soy as other ‘hosts’).

Predictably, some celiacs are reacting to this in a bad way. Could there be some kind of crossover when using wheat to create Xanthan gum? An article on Celiac.com claims that some people can develop an allergy to Xanthan gum and that regular consumption can cause unpleasant health issues. Ironically, a lot of these symptoms are not dissimilar from a typical gluten reaction. Also, people who are sensitive to corn or have allergies to corn are advised to stay away from xanthan gum.

Most of the issues are gastrointestinal – bloating, gas and diarrhoea. Other symptoms include migraine headaches, nose and throat irritation and skin itchiness. It appears repeated exposure may worsen symptoms and so cutting out the gums brought some relief.

What about guar gum? There isn’t much information about people developing sensitivity to guar itself, but it’s interesting to note that in ‘large’ quantities, it is a laxative. Ultimately, consuming guar gum could result in gastro-intestinal problems too.

The bottom line is this: binding agents like xanthan gum and guar gum make gluten free baking easier. For most people, these will remain the hallmarks of gluten free baking, but it’s clear to see they are not the Holy Grail. Alternatives do exist and they produce results which appear to be just as impressive. They just require a little more skill and dedication to produce good results.