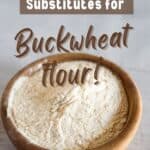 Milled from the seeds of the buckwheat plant, buckwheat flour is commonly used in gluten free baking for both sweet and savory recipes. It can add great flavor and provide moisture and tenderness to quick breads, yeast breads, and more. But if you don’t have any on hand, there are several comparable gluten free substitutes for buckwheat flour available.

Despite having “wheat” in the name, buckwheat has no relation to the wheat grain at all. It is known as a “pseudo-grain”, meaning that it resembles a grain and performs similarly in baking. In fact, this buckwheat bread is made from 100% buckwheat, (no starch!). And these buckwheat biscuits are always a hit.

Besides being naturally gluten-free, buckwheat flour has a prominent earthy, nutty flavor with a unique bitterness. It’s often used in combination with other flours that have a milder flavor.

When replacing buckwheat flour in a recipe, the most important thing to consider is the protein and fiber content. Buckwheat flour contains an equal amount of these two nutrients (reference this guide to gluten free flour chart). Flours that have similar amounts of protein and fiber will make the best substitutions. Keep in mind that not all flours can be substituted in equal amounts. To make things easy, I have compiled a list of the very best substitutes for buckwheat flour and what ratios to use.

Each of these buckwheat flour alternatives will yield a similar result in your baked goods. Because they contain comparable amounts of fiber and protein, they can also be used as a substitution in equal amounts (1:1 ratio).

The perfect replacement for buckwheat flour is teff flour because its fiber and protein content is almost exactly the same. Teff flour is a naturally gluten free and 100% whole grain flour. It lends a light, mild nutty flavor to baked goods and is packed with nutrients. Because it contains more of the bran and germ than other flours, teff flour is high in fiber, protein, iron, amino acids, vitamin C, and calcium. Teff is also known for being the smallest grain in the world. Due to its size, it’s very hard to grind your own teff flour at home. However, you can find teff flour for a great price here.

Millet flour is also a wonderful substitute for buckwheat flour. It has a bit less protein than buckwheat but contains equal amounts of dietary fiber. Millet is a versatile, gluten free whole grain with a light, mild flavor. This makes it an excellent choice for both sweet and savory baking, like in this millet bread and these millet biscuits. Additionally, it provides a tender and delicate consistency to baked goods.

Another terrific alternative for buckwheat flour is amaranth flour which is just slightly lower in fiber and protein than buckwheat. Its fine consistency and mildly sweet nutty flavor make it a great flour for gluten free baking. Milled from the seed of an amaranth plant, amaranth flour is naturally gluten free and can be used on its own or as part of a flour blend. When baking with amaranth flour, you may need additional leavening agents in your recipe to avoid a dense texture. This is due to this flour’s ability to absorb large amounts of water.

Another great substitute for buckwheat flour is sorghum flour. It is an excellent option for various baked goods such as this sorghum bread, this banana cake and these blondies. Sorghum flour has a mild, sweet flavor and smooth texture that is similar to all-purpose flour. Like buckwheat flour, it’s also a good source of fiber and protein.

These secondary substitutions also work well in gluten free baking. That being said, they are considered secondary alternatives because they are best used in combination with buckwheat flour, rather than as a direct replacement. This is because of the difference in fiber and protein content compared to buckwheat. This increases the chance that they may alter the outcome of a recipe.

Oat flour is a really good secondary substitute for buckwheat flour because of its versatility in baking. It provides a warm, nutty flavor that is more mild compared to buckwheat. Oat flour also lends a soft and fluffy texture to baked goods, like in these pancakes, these brownies and these biscuits. It makes a wonderful choice for cakes, muffins, and even yeast breads, like this oatmeal bread. Another good thing about oat flour is that it’s not hard to find in most grocery stores. It’s also extremely easy to make at home using a high-speed blender or food processor. Be sure to purchase oats and/or oat flour that is labeled as “certified gluten free”.

Quinoa flour is another acceptable secondary substitute for buckwheat flour. It has a nutty, earthy flavor that is a little less sweet than buckwheat flour. Quinoa flour is made from ground whole grain quinoa. It is naturally gluten free and yields a tender crumb to baked goods. Because it absorbs a lot of moisture, it is best used in combination with other flours or with additional binders. Otherwise, your baked goods may be slightly more dry, crumbly, or crisp.

Quinoa flour is a bit more on the expensive side. Luckily, it is pretty simple to make at home by toasting raw quinoa seeds and then grinding them down to a powder using a food processor or coffee grinder. It is necessary to toast the quinoa seeds to reduce bitterness and bring out the rich, nutty flavor.

Brown rice flour is also an option as a secondary replacement for buckwheat flour. It is made from ground whole grain brown rice. Its mild, nutty flavor and versatility in baking make it a common choice for gluten free flour mixes, like the one here on Zest For Baking. Brown rice flour has a slightly coarse and gritty texture and is a bit denser than buckwheat flour. In addition to being used in a variety of baked goods, it also works well as a thickener in gravies and sauces.

How would I substitute buckwheat flour for brown rice flour in a yeast bread?

Since brown rice flour is a secondary option for buckwheat, you'll need to use a combination of flours. Use ⅔ cup of a flour in the best category, like sorghum flour, and then ⅓ cup of brown rice flour.

It depends how quickly you plan on using it, but generally in a well sealed bag or container. I go into more detail in this flour storage post.

Where is the best (low cost) place to buy buckwheat flour?

Not all buckwheat flour is the same. The flour I use and recommend is from Bouchard Farms.