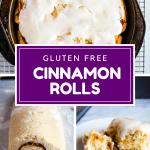 Nothing quite like the aroma of these freshly baked homemade gluten free cinnamon rolls. Topped with a gooey icing and served warm, they’re a delicious treat for any time of day! 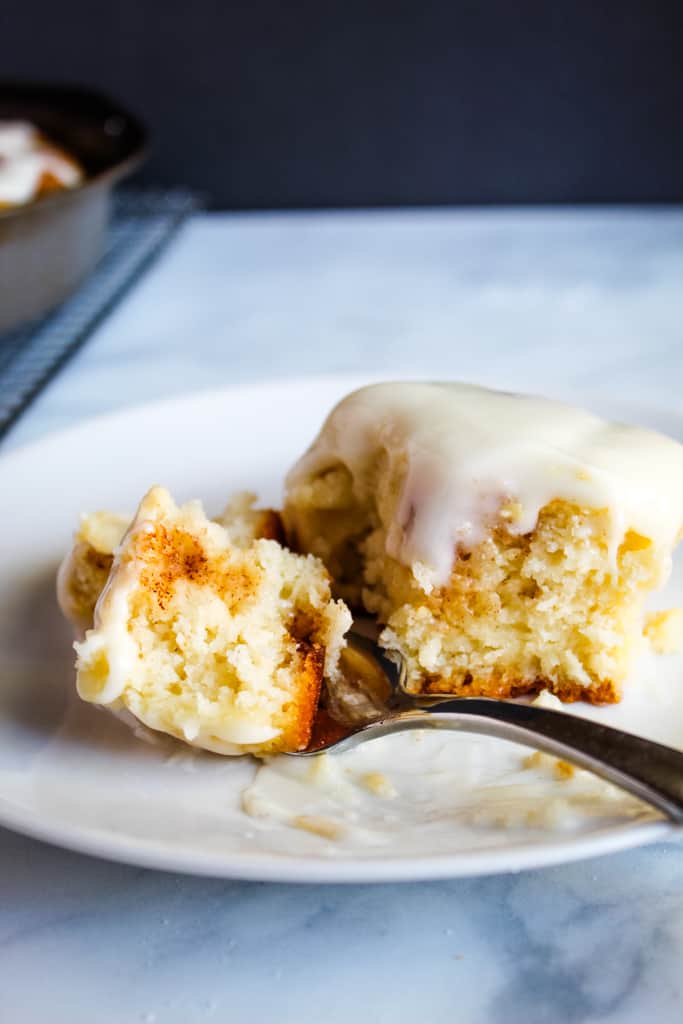 Cinnamon rolls are usually reserved for special occasions right? A special celebration or a holiday with friends and family. But why should special occasions get all the fun?! Cinnamon rolls should be enjoyed any time the mood strikes. But the problem with typical cinnamon roll recipes is the time involved with actually making these luscious treats is usually so intensive that one look at the recipe and well, these breakfast sandwiches are also delicious, so let’s just do those.

Cinnamon rolls are saved for yet another special occasion.

But here’s the good news, there is such a thing as quick cinnamon rolls that use a yeast dough. So why not surprise your loved ones with a batch of warm, fresh from the oven gluten free cinnamon rolls?!

What makes these gluten free cinnamon rolls the best?

For these four reasons:

Can I make these gluten free cinnamon rolls dairy free?

I wish I could say yes here, but unfortunately, I haven’t tested them without the butter, cream cheese and milk so I can’t say for certain how they will turn out.

But check out this Delicious Crusty French Bread that IS Dairy Free!

How can I make sure the dough doesn’t stick to the counter too much?

Before turning the dough out of the bowl, position a large sheet (or use two sheets overlapping if needed) on top of counter. Then sprinkle it with a bit of gluten free flour blend. This will allow you to easily roll out the dough, but prevent it from sticking. 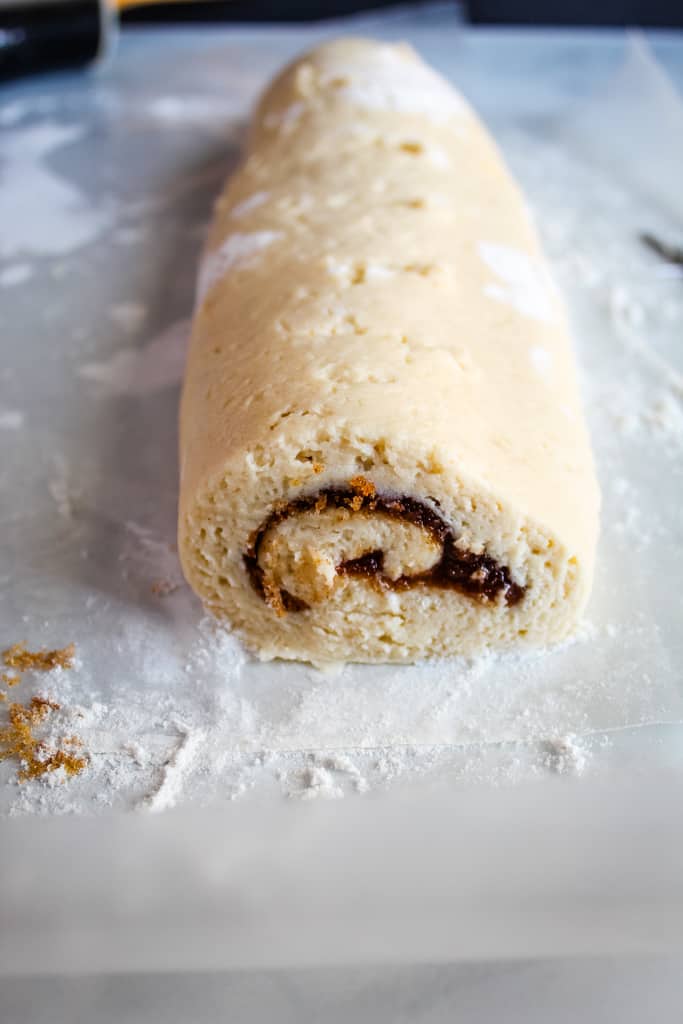 A common, everyday item makes slicing cinnamon rolls a breeze. Tooth floss! Tooth floss cuts right through the dough without disrupting all the cinnamon filling, like a knife has a tendency to do.

Can I make the dough the night before?

Actually, you can make the whole recipe the night before and then just pop them into the oven to bake the next day. After placing the rolls into the baking pan, cover the pan with plastic wrap and place it into the refrigerator. The next day, take the pan out and let it come to room temperature for 20 minutes. Then bake as usual. 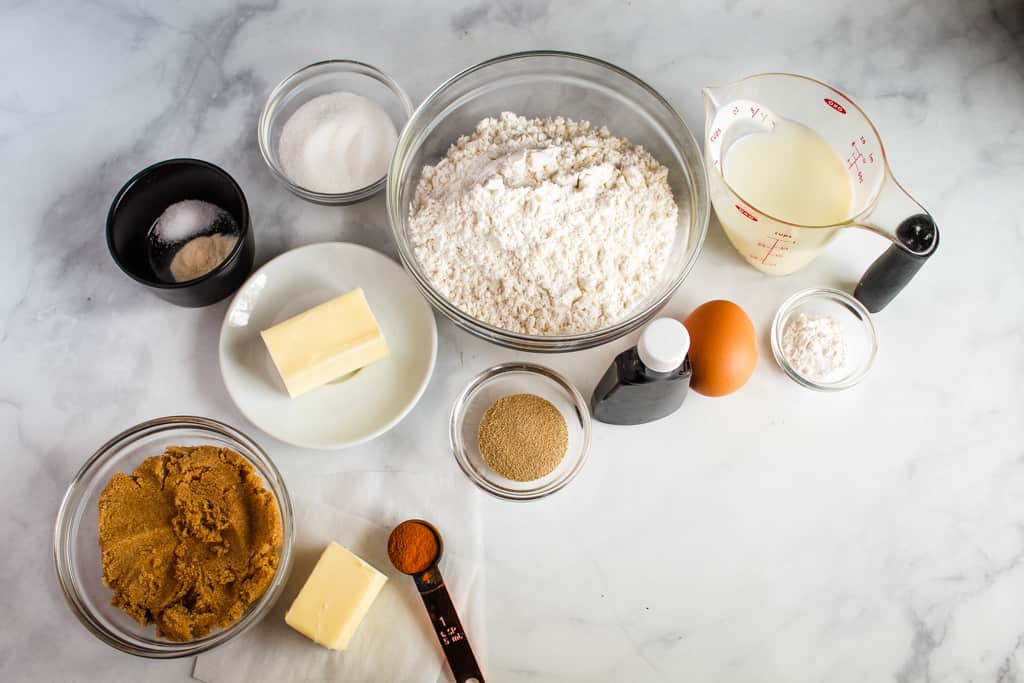 With the exception of the milk, which should be warmed to 100 F, the other ingredients for making these cinnamon rolls should be at room temperature. This is very important so that the ingredients mix together well.

Tip for warming eggs: To quickly bring an egg to room temperature, place it whole into a glass of warm water. Depending on the temperature of the water, you may only need to keep it in there for a minute or so. 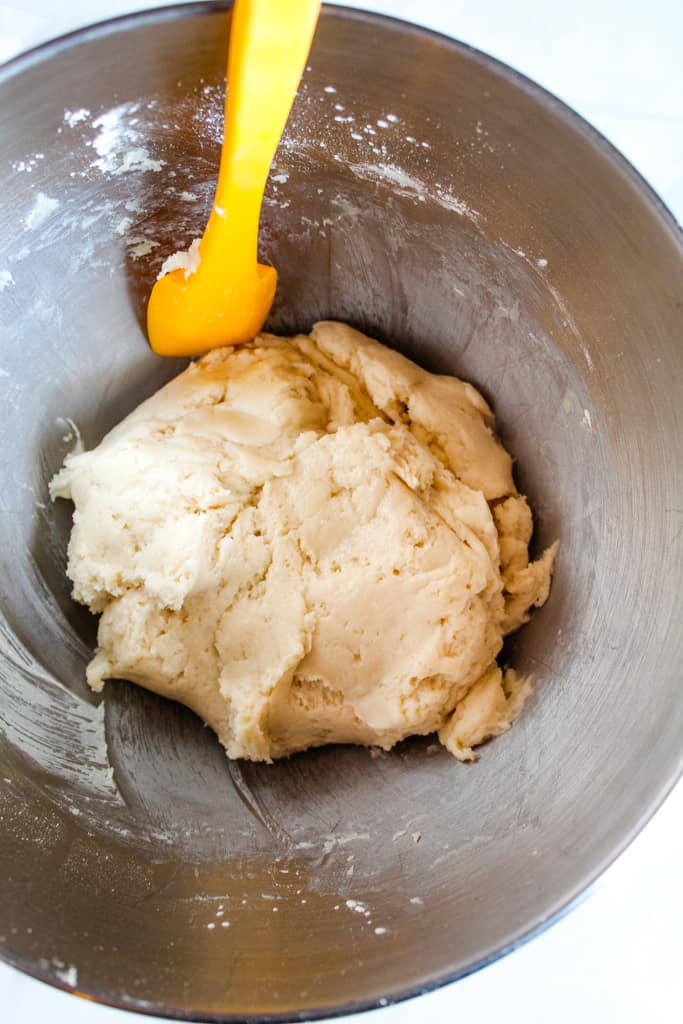 After all the mixing has been done, the dough will look uniform and should stick together nicely. It won’t be as solid as gluten dough, but it should be soft and holds its shape when positioned on the wax paper.

Rolling out the dough 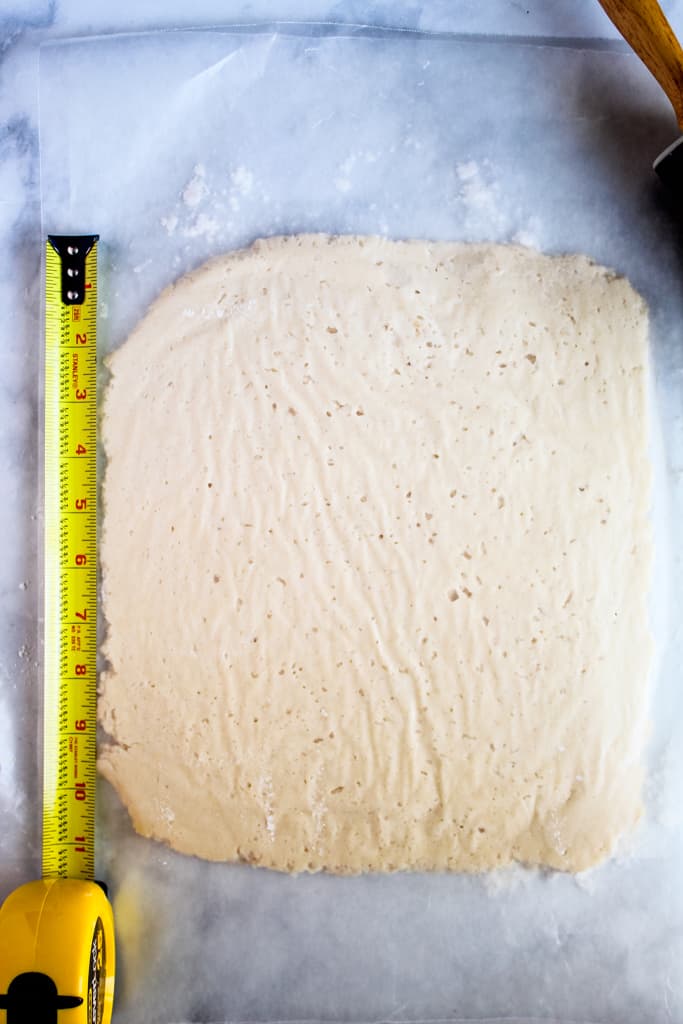 The key to the lightest, fluffiest gluten free cinnamon rolls is to not get carried away when rolling out the dough. An 11” by 10” section is what you want to aim for. Any larger than that and the dough gets thinner. Thinner dough has a tendency to rip and not stick together. 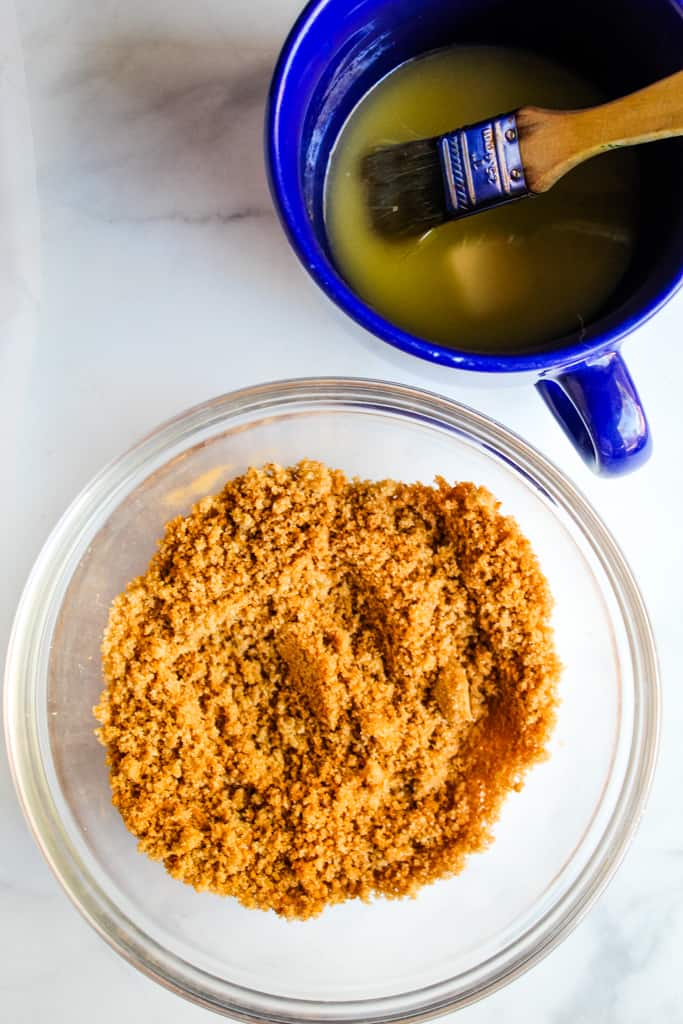 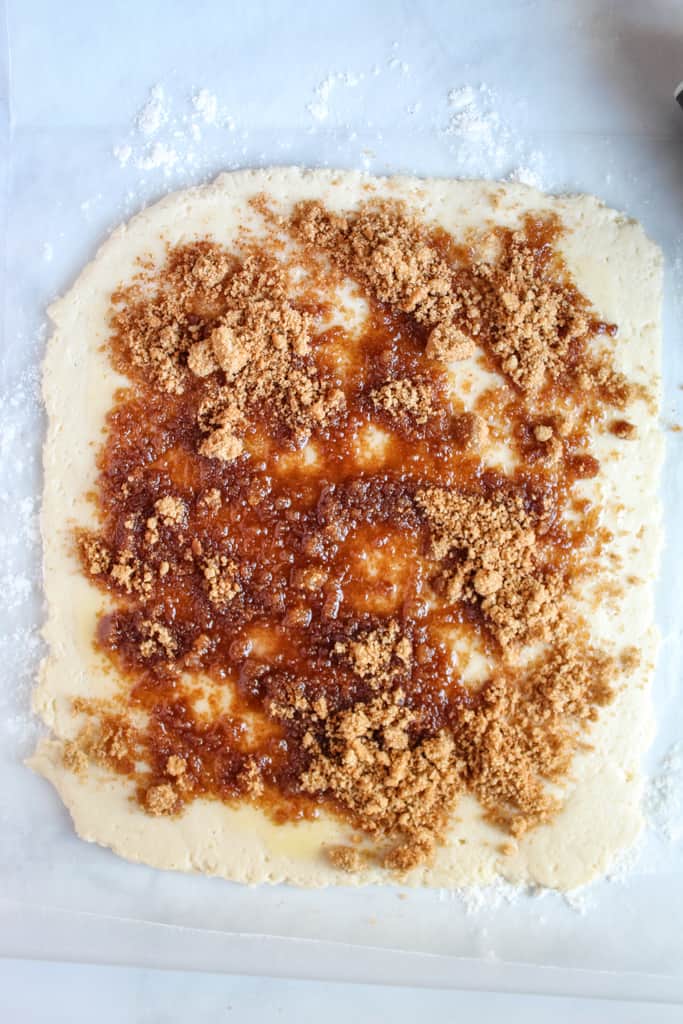 The delicious brown sugar-butter filling is the star of the show, well, as far as cinnamon rolls go that is. You’ll want to brush the melted butter onto the rolled out dough and then quickly sprinkle the filling onto the butter. You’ll need to work quickly as the melted butter will spread and possibly pour off the dough.

Rolling up the dough

After the filling comes the fun part… rolling up the dough.

For the easiest way to both roll the dough and keep it all together, use the wax paper as your helper. Start with a long side edge, then start rolling, using the wax paper as you continue to roll up the entire, filling topped dough. You should end up with a log that looks like this… 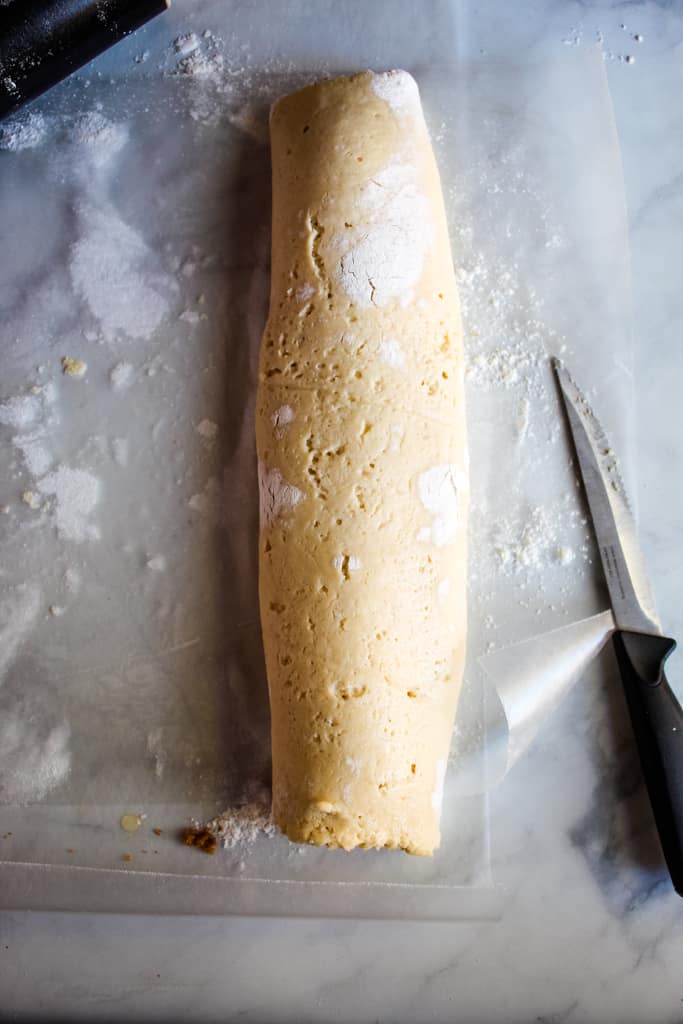 You’re almost there to the best GF cinnamon rolls ever!

To easily slice this long cylinder of dough, all you need is tooth floss and a knife. Yes, you read right – plain old tooth floss.

First, score the dough into 8 pieces with the knife.

Then, start at the end of the dough furthest from you. Take out a long piece of tooth floss and slide it underneath the log of dough at the furthest end from you. Pull it all the way to the front of the log (keeping it underneath it).

Once you come to your first dough score, pull the floss through the dough, making a criss-cross as you come through it. 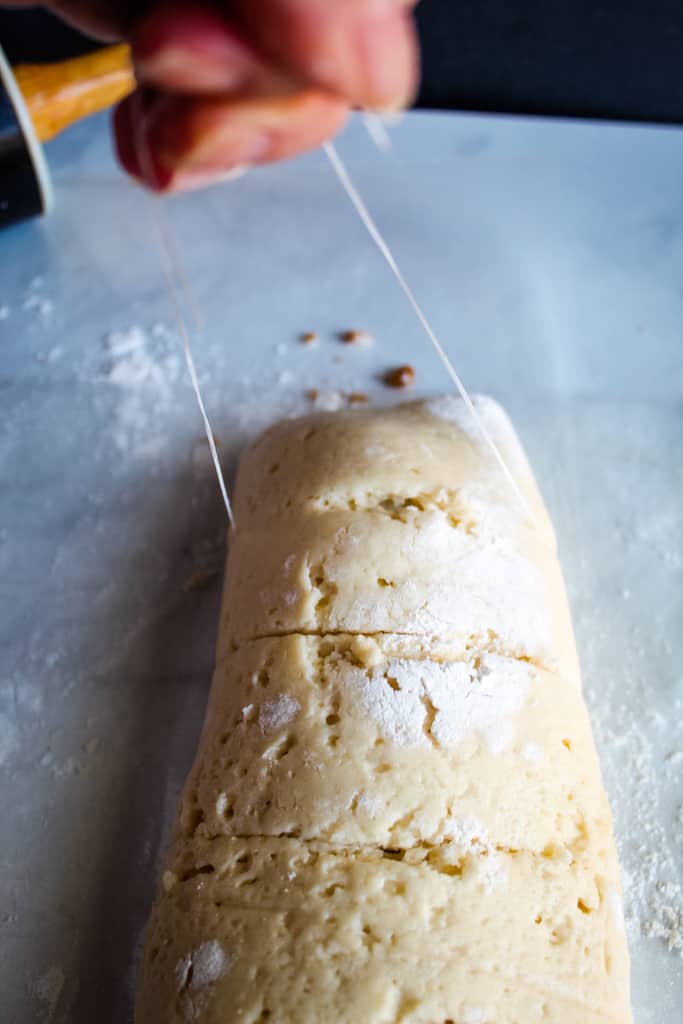 Repeat this process for the remaining slices. Position the floss under the log, moving it down to your score mark, slicing, then again.

Placing in the baking pan

A flat spatula makes moving these freshly cut cinnamon rolls a breeze. Just slide it under each one and move it to the prepared pan. 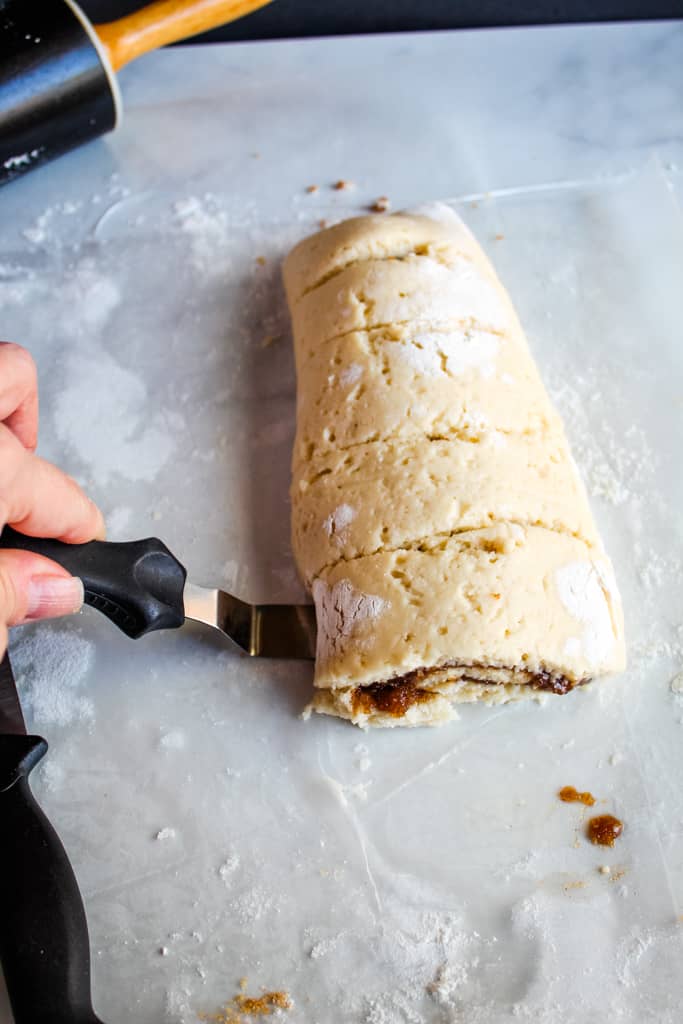 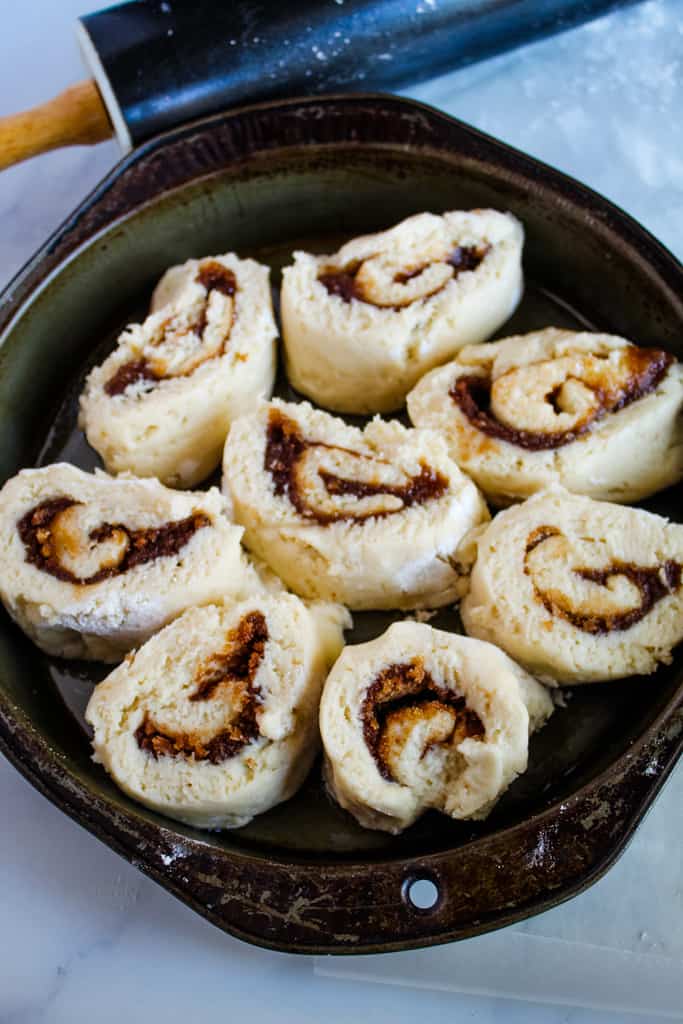 After baking, the rolls should be a lovely golden brown. Wait just a couple minutes and then spread the icing over the warm cinnamon rolls. It will seep in between the rolls and make for an amazing, ooey gooey cinnamon roll. 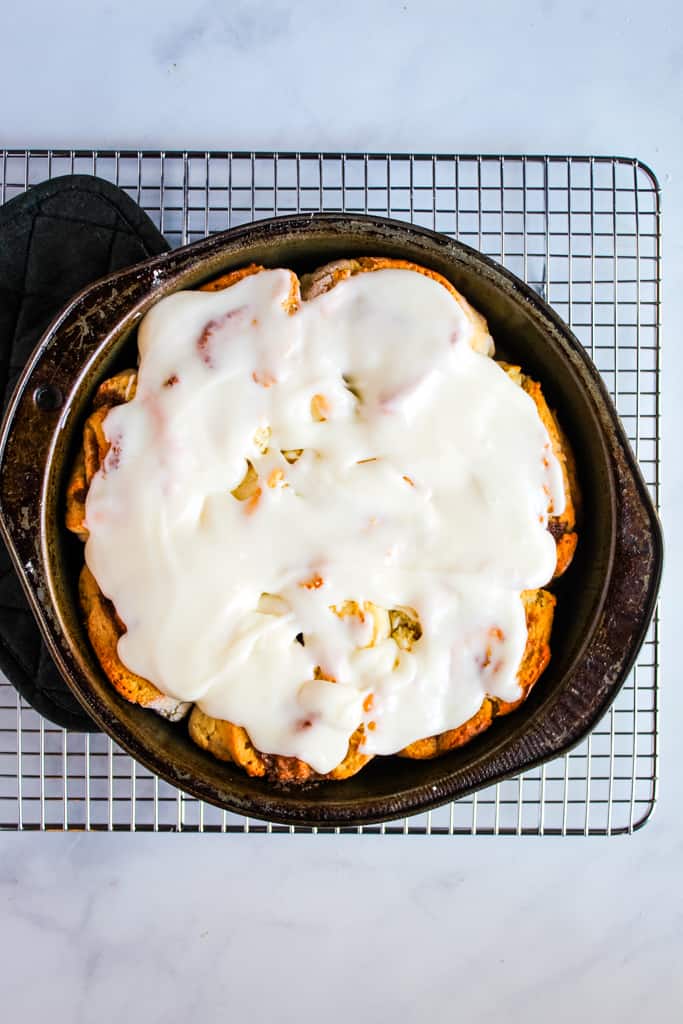 If your mouth is watering for these best ever gluten free cinnamon rolls, here is the recipe to satisfy the cinnamon roll craving any time of year! 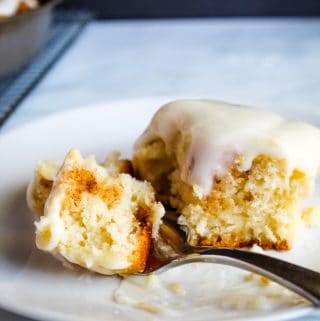 For more delicious gluten free bread recipes, head over to: 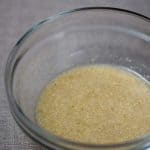 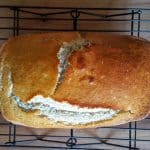 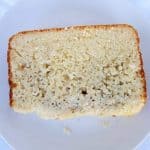 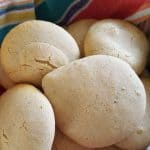 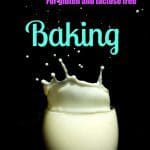 Since 2013, Christine has been creating delicious gluten free baking recipes that no one would guess are actually gluten free. Her Zest For Baking recipes have been featured on The Daily Meal, Bloglovin' and Dr. Axe, to name a few. When she's not hanging out on Facebook or sharing pictures on Instagram or pinning on Pinterest, you can find her in her kitchen, creating more ZestForBaking.com recipes!