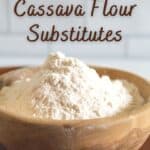 Gluten free baking can be a little intimidating because it poses some challenges that aren’t as prominent in traditional baking. Some of this difficulty comes from the vast number of gluten free flours available today.

One of the less common gluten flours you’ve probably come across is cassava flour. Although it's not a flour that most people are familiar with, cassava flour is a fantastic gluten free option for both sweet and savory recipes, which these cassava tortillas will accommodate nicely. That being said, it may not be an ingredient you normally have on hand. For that reason, I’ve put together a list of the best cassava flour substitutes for gluten free baking.

What is cassava flour?

Cassava flour, also called yuca flour, is made from the whole root of the tropical cassava plant. It is often associated with tapioca starch which also comes from the cassava plant but is produced from the starchy portion of the root only. Cassava flour is made when the whole root is peeled, dried, and milled into a fine powder. While they do have similarities, like potato starch and potato flour, cassava flour and tapioca starch are two different types of flours and cannot be used interchangeably.

Since it comes from a tuber, cassava flour is gluten, grain, and nut free. In addition to being a low-allergen flour, it provides a variety of essential nutrients. Cassava flour contains a significant amount of resistant starch and antioxidants, making it beneficial for digestion and inflammation. It’s also high in vitamins including potassium, iron, calcium, and folate. Compared to other gluten free flours, cassava flour is low in fat, calories, and sodium.

The neutral flavor and fine powdery texture make cassava flour a popular choice for desserts like cakes, muffins, and brownies. It also makes a delicious bread and can also be used as a thickener in soups and sauces as well as a binder in foods like meatballs. Cassava flour may be used in baking as part of a gluten free flour blend but can also stand on its own in many recipes. The light consistency provides a soft and delicate texture to baked goods.

Cassava is very similar to wheat flour and is often used as a gluten free alternative. However, compared to wheat flour, cassava flour has a slightly lighter texture and is more absorbent. This means it can’t be used as a direct replacement in baked goods that call for wheat flour without altering the texture. You should substitute ¾ cup of cassava flour for 1 cup of wheat flour.

Almond flour is also a good alternative to cassava flour. It’s a great option for gluten free baking because it’s versatile, easy to use and has a long list of alternatives that work well for it. It has a light nutty flavor that works well in a variety of recipes like cupcakes, muffins and biscuits. Made from ground, blanched almonds, almond flour has a higher fat and moisture content than cassava flour. When substituting cassava flour with almond flour in a recipe, an additional starch is needed for the best results. For every 1 cup of cassava flour, replace with ⅔ cup of almond flour and ⅓ cup of tapioca starch.

Brown rice flour is another common gluten free flour that can replace cassava. It's often used in gluten free pancakes, muffins, and breads. It can also be used as a thickener. It is made from whole grain brown rice and lends a rich nutty flavor to breads and desserts. Brown rice flour must be paired with a starch when you use it as a cassava substitute. Use ⅔ cup of brown rice flour and ⅓ of starch to replace 1 cup of cassava flour.

Another good cassava flour substitute is quinoa flour. It is made from naturally gluten free whole grain quinoa and yields a tender crumb to baked goods, like in these muffins. Like cassava, quinoa flour has a mild flavor that makes it versatile in gluten free baking and cooking. It offers a significant amount of iron as well as high-quality protein. Quinoa flour cannot be used in equal amounts to replace cassava flour. It needs to be combined with a starch for the best overall taste and texture. Replace 1 cup of cassava flour with ⅔ cup of quinoa flour and ⅓ cup of starch in your recipe.

Millet flour is also an acceptable alternative to cassava flour. It is an all-purpose gluten free flour with a light and mild taste that works well in baking. Like cassava flour, it lends a tender and delicate texture to baked goods, such as yeast breads and biscuits. It's also packed with nutrients including protein, fiber, and essential amino acids. Like many other cassava substitutes, millet flour needs to be mixed with a starch for the best outcome. For 1 cup of cassava flour in a recipe, use ⅔ cup of millet flour and ⅓ cup of starch.

Cassava flour can also be substituted with arrowroot powder (also known as arrowroot starch and arrowroot flour). This gluten and grain free flour is made from the root of the tropical arrowroot plant. This starchy flour is flavorless and odorless, so it has a lot of uses in gluten free baking and cooking. Arrowroot powder is also easily digestible for people with various food sensitivities. It acts as a thickener or binder in many recipes and provides and light and fluffy texture to baked goods. Arrowroot powder only works well as an alternative for cassava in recipes that call for multiple types of flour. For example, if a recipe calls for cassava flour and sorghum flour, arrowroot powder can replace the cassava flour.

The best substitute is a gluten free flour mix. It has the perfect balance of flours and starches that mimic cassava flour.

Is cassava flour a good substitute for wheat flour?

It can be. It just depends on the recipe. As a good rule of thumb, start with substituting half of the wheat flour for cassava flour.

Is there a one-for-one substitute?